The "What is" files:
Passive Radiators

Passive radiators (PRs) are sometimes thought to be a bit "sneaky" by owners who take their speakers apart to examine them in the case of damage or deterioration. Why is this? Because while they look like, and even sound a bit like, normal powered woofers from the "outside," from the inside they are different. They are not hooked up to the speaker wiring, and they do not have magnets mounted on their baskets (if they even have baskets at all). Some manufacturers or salespeople even take advantage of this appearance to imply that the speaker has a larger woofer than it does (most times PRs are larger than the active woofer in the speaker) or that it has two woofers, creating in the customer's mind the impression that the speaker will have stronger or louder bass because of this. Not that bigger woofers, or even more woofers, will necessarily do this!

So what are passive radiators, what do they do, how do they work, and what are the pros and cons of using them?

1. A passive radiator is essentially a weight on a spring. The weight is the combination of the cone material and whatever mass loading might be used - this is the critical part of PR design and must be correct for the part to function properly. The spring is partly the stiffness of the suspension materials (which are usually quite flexible), and mostly the air trapped inside the cabinet. (Later I will mention the passive radiator system as a sub-class of all "vented" systems. They are mathematically identical, the typical vented system using a "port," or hole in the box, with a tube attached to it, to create the "mass and spring" effect - the mass being the air column in the tube)

2. A passive radiator is tuned (by the mass loading) to resonate, like a tuning fork does when its tone is played on an instrument, at a frequency below the active woofer's linear response range. Unlike the tuning fork, which is designed to resonate very loudly at one specific frequency, with a response which falls off very rapidly above and below it, a PR will respond to tones on each side of its resonance with a carefully controlled roll off. These are typically 18 dB/octave slopes, which while pretty steep, give the device a useful range of about half an octave.

As I said, this tuning is below the "normal" response range of the active woofer. All woofers, as the frequency gets lower and lower, eventually make less acoustic energy (noise, or music if you are tasteful!). The frequency at which they start to drop in output is usually described by a slightly lower point, called the "-3 dB" point. This is the frequency at which the woofers output is 3 decibels lower than the typical pressure it produces over its usable range. By tuning the PR so it becomes excited at a frequency below this, it contributes to the systems total output by adding about a half octave of bass extension to the speaker. Its tuning is such that at any given point, the combined output of the passive and the woofer adds up to the level produced by the woofer on its own at higher frequencies. Of course, below the PR's resonance, reponse falls off pretty sharply, but "between" that resonance and the woofer normal roll off point, is a small amount of bass extension in a range where otherwise the response would be much lower.

3. It may seem logical that the passive would operate somewhat like a lever, with its cone moving out at the same time as the woofer cone moves inward, and vice versa. This is not the case, however. In fact, both cones could move in or out together (this is called "in phase"), or any combination of opposite motions ("out of phase" - the most extreme being "180 degrees" out of phase - like the lever effect described above). Ideally, in order to reinforce each others sound, they would be exactly in phase, but in reality, due to the physics of this sort of resonant system, they are out of phase to some degree most of the time.

4. This is one of the advantages of this type of system - it takes the burden away from the (typically) smaller diameter woofer of producing the lowest tones (which require the most air movement to be equally loud) and shifts it to the larger diameter PR, which often also has a suspension capable of greater linear excursion (motion in and out). Another obvious advantage is that the point at which the bass response starts to drop off is lower, giving a more extended linear bass response to the system. Also, it can allow the use of a smaller diameter woofer, which results in more accurate and better dispersed response at the other bass and low midrange tones.

5. Unfortunately there are some drawbacks as well. One, alluded to above, concerns the "phase response" of the woofer-PR system. Ideally, all the frequencies produced by an audio system (and the chain of recording gear ahead of it) will be in phase. This means that the compression phase of a wave (see "What is Sound") in the recording environment will result in a compression phase in the listening room, at any and all frequencies. It has been found that so long as the overall phase response does not contain any sudden changes or discontinuities, the human ear/brain system will not notice or be bothered by it. However, when the phase response changes rapidly over a small range, it can be noticeable - some people are more sensitive to this than others. The very nature of the resonant system employed results in phase problems of this nature in this narrow range of tones.

Another problem is that due to the fairly sharp tuning of the PR, that is the way its response falls off rapidly above and below its tuned resonance, the frequencies below its tuning will roll off very rapidly - and in addition, the air in the speaker box no longer acts like a spring to control and restore the motion of the PR and especially the woofer. A woofer in a sealed enclosure (see What is Acoustic Suspension) moves less and less at lower frequencies, because it cannot compress the air in the cabinet enough to move in and out very far, and so it will not tend to "tear itself apart," or produce unwanted high levels of distorted signal as it moves out of control.

An acoustic suspension system also tapers off in its response at only 6 dB per octave. The vented, or passive radiator, system rolls off at 18 dB per octave and thus produces very little usable bass below its resonance - and what it does produce can be rather distorted.

For these two reasons, vented systems in general are a poor choice for small speakers that roll off much above 40 Hz - there is too much signal present, in the range they respond to poorly, for them to work well. A larger speaker will work better with this sort of set up because at the frequencies that might be troublesome, there is rarely any musical signal present.

Here is a typical Passive Radiator: 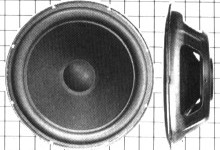